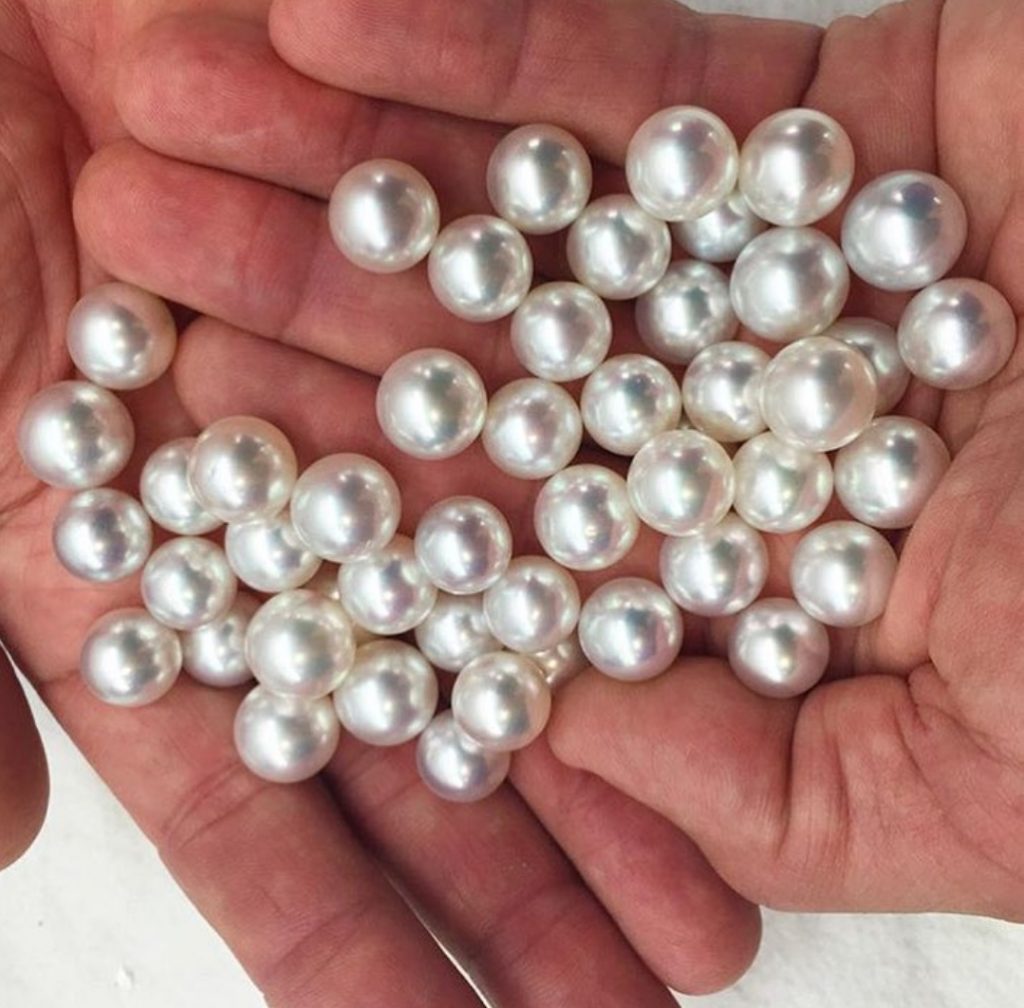 Like diamonds, South Sea pearls also have grading systems to assess their quality. At Diamonds and Pearls Jewellery, we follow the Autore Five S grading approach to assist us in explaining the unique characteristics of your South Sea pearl.

According to Autore, the Five S’s are: Shine, Surface, Shape, Shade and Size.

As in all things, true beauty comes from within, so the virtue rated above all others in a South Sea pearl is its lustre and shine. Lustre is the result of light reflected from the pearl’s surface combined with its deep inner glow (iridescence).

South Sea pearls are made up of many fine layers of a crystal-like substance called nacre, comprising organic and inorganic materials secreted from within the living tissue of the oyster. The quality and thickness of nacre gives a pearl both its radiance and its deep glow. The combination of light reflecting on the pearl’s surface and light refracting between each layer of nacre within the pearl is what makes this gem unique.

Shine has the magic to minimise other imperfections and is considered the soul of the pearl.

There are five broad categories of lustre:

There are two essential aspects to be considered when assessing the surface of a pearl: blemishes and grain.

The surface of a pearl is essentially its skin. Because South Sea pearls have layers of lustrous nacre built up over time, a flawless surface is extremely rare.

As pearls are a gift of nature from a living mollusc, the most beautiful and valuable pearls may still have slight imperfections which appear in the form of small blemishes. These naturally bestowed ‘beauty marks’ characterise each pearl as an individual creation.

The pearl grain refers to the composition of the pearl’s skin and its structure. The tighter the structure of the pearl, the less evident is its grain. The grain will appear as slight ripples on the pearl’s surface.

In cases where the grain is only just visible, it will give the pearl a slightly fractured appearance. As these fractures become larger and more evident, they will appear as “cracks” within the structure of the pearl.

South Sea pearls come in a variety of shapes, making them an incredibly difficult gem to classify without a professionally trained eye. A product of nature, each pearl is individual and unique.

The major categories of South Sea pearl shapes are; round, near round, drop, button, baroque and circle. With the exception of round and near round pearls, there is a variation of different types within each shape category. However, to simplify pearl shapes, some general principles can be applied.

Near round pearls are ideal for jewellery and strand making as they appear round once set.

The species of oyster and the environment in which they grow are the main factors behind determining a pearl’s colour and complexion. South Sea pearls are highly coveted for their rich, varied colours.

Each pearl reflects colour in a different way – boldly on the surface or hinting at hues from within layers of nacre.

South Sea pearls are renowned for their large sizes. The Pinctada maxima oyster is the largest species of oyster capable of producing a pearl. South Sea pearls are measured in millimetres and commonly range from 9-20+mm, with the majority falling within a range of 10-17mm. Though extremely rare, the irregularly shaped baroque South Sea pearl can reach sizes of up to 40mm or more.